The Sunnah (the actions, sayings and confirmations of Prophet Muhammad, salallaahu alayhi wa sallam is the second source of Islamic legislation and must be in complete agreement with the first source (i. e. the Quran).
The term Sunnah comes from the root word ‘sanna’, which means to pave the way. Sunnah can be used to describe a path that people follow. In Islamic terminology, Sunnah applies to a prophetic way which includes references to the Prophet’s sayings, actions, approvals, physical features and character traits. His actions pertain to anything he did, as authentically reported by the Companions

. His silent approvals on different issues meant he didn’t oppose or mind what he saw, heard or knew of the actions or sayings of his Companions. Sunnah also includes everything authentically narrated concerning the Prophet’s physical features and his traits. The Quran and the Sunnah complement each other. Without the Sunnah, Islam is not complete, likewise without the Quran, Islam is not complete. Actually, Sunnah is so important that without it one cannot fully understand the Quran and Islam, or be able to apply it to his life. Both of these sources guide us to the right path. The Quran is the word of Allah, whereas the Sunnah is its practical interpretation. Sunnah also gives a full account of the life of the Prophet salallaahu alayhi wa sallam. The Quran principally deals with basics. It is the Sunnah which gives the details and necessary explanations of Quranic injunctions. For instance, Allaah Says in the Quran what means: “…Establish the prayer…” [2: 43] But it does not specify how the prayer has to be performed. Even after knowing the details, it may not be possible to follow the divine injunctions contained in the Quran. For not everything can be properly understood by words alone. Therefore, the Messenger of Allaah salallaahu alayhi wa sallam demonstrated before the believers how the prayer was to be performed. Thus, not only did the Prophet salallaahu alayhi wa sallam inform the believers of the divine injunctions, but he also put these teachings into practice in all matters pertaining to religion and daily life. He salallaahu alayhi wa sallam himself practiced these injunctions scrupulously. His practice was not a private matter; it had the status of a detailed interpretation and application of the Quran. Importance of the Sunnah The Quran repeatedly reminds us of the importance of the Sunnah, enjoining us to strictly follow the Prophet salallaahu alayhi wa sallam. Allaah, Almighty, Says what means: “…And whatever the Messenger has given you – take; and what he has forbidden you – refrain from…” [Quran 59:7] Allaah also Says what means: “But no, by your Lord, they will not [truly] believe until they make you [O Muhammad] judge concerning that over which they dispute among themselves and then find within themselves no discomfort from what you have judged and submit in [full, willing] submission..” [Quran 4:65) Again, Allaah Says what means: “It is not for a believing man or a believing woman, when Allaah and His Messenger have decided a matter, that they should [thereafter] have any choice about their affair. And whoever disobeys Allaah and His Messenger has certainly strayed into clear error.” [Quran 33:36] According to many verses in the Quran, the Muslim is bound to follow the Sunnah of the Prophet salallaahu alayhi wa sallam. No one remains Muslim if he does not accept the Prophet’s Sunnah, salallaahu alayhi wa sallam. END_OF_DOCUMENT_TOKEN_TO_BE_REPLACED

In the Middle East, during these centuries, the ‘Abbasids, after their victory over the Umayyads, had transformed the Umayyads’ Arab empire into a multinational Muslim empire. They moved the capital of the empire from Syria to Iraq, where they built a new capital, Baghdad, from which, during the next five centuries, they would influence many of the main events of Islamic history. 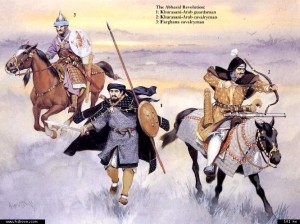 In the early period of ‘Abbasid rule, al-Mansur, the second caliph of the dynasty, continued the reorganization of the administration of the empire along the lines that had been laid down by his Umayyad predecessor, ‘Abd al-Malik. Much of the ‘Abbasid administration, for example, was left in the hands of well-educated Persian civil servants, many of whom came from families that had traditionally served the Sassanid kings. The important office of wazir or vizier, chief counselor, may well have developed from Sassanid models. The vizier was much more than an advisor; indeed, when the caliph was weak, a capable vizier became the most powerful man in the empire. END_OF_DOCUMENT_TOKEN_TO_BE_REPLACED

By the time ‘Abd al-Rahman reached Spain, the Arabs from North Africa were already entrenched on the Iberian Peninsula and had begun to write one of the most glorious chapters in Islamic history. 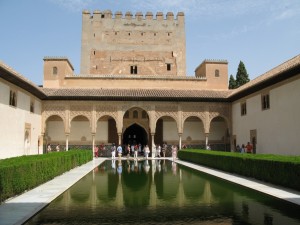 After their forays into France were blunted by Charles Martel, the Muslims in Spain had begun to focus their whole attention on what they called al-Andalus, southern Spain (Andalusia), and to build there a civilization far superior to anything Spain had ever known. Reigning with wisdom and justice, they treated Christians and Jews with tolerance, with the result that many embraced Islam. They also improved trade and agriculture, patronized the arts, made valuable contributions to science, and established Cordoba as the most sophisticated city in Europe.
By the tenth century, Cordoba could boast of a population of some 500,000, compared to about 38,000 in Paris. According to the chronicles of the day, the city had 700 mosques, some 60,000 palaces, and 70 libraries – one reportedly housing 500,000 manuscripts and employing a staff of researchers, illuminators, and book binders. Cordoba also had some 900 public baths, Europe’s first street lights and, five miles outside the city, the caliphal residence, Madinat al-Zahra. A complex of marble, stucco, ivory, and onyx, Madinat al-Zahra took forty years to build, cost close to one-third of Cordoba’s revenue, and was, until destroyed in the eleventh century, one of the wonders of the age. Its restoration, begun in the early years of this century, is still under way. END_OF_DOCUMENT_TOKEN_TO_BE_REPLACED

The shift in power to Damascus, the Umayyad capital city, was to have profound effects on the development of Islamic history. For one thing, it was a tacit recognition of the end of an era. The first four caliphs had been without exception Companions of the Prophet – pious, sincere men who had lived no differently from their neighbors and who preserved the simple habits of their ancestors despite the massive influx of wealth from the conquered territories. Even ‘Uthman, whose policies had such a divisive effect, was essentially dedicated more to the concerns of the next world than of this. With the shift to Damascus much was changed.

In the early days of Islam, the extension of Islamic rule had been based on an uncomplicated desire to spread the Word of God. Although the Muslims used force when they met resistance they did not compel their enemies to accept Islam. On the contrary, the Muslims permitted Christians and Jews to practice their own faith and numerous conversions to Islam were the result of exposure to a faith that was simple and inspiring. END_OF_DOCUMENT_TOKEN_TO_BE_REPLACED

The word Eid in Arabic means: ‘a gathering of a group at any day.’ It is also related to the meaning: ‘to return’ which indicates that this day returns again every year. From an Islamic perspective, Eid is the day Muslims celebrate finishing the fasting of the month of Ramadan. Eid (El-Fitr) or breaking fast (1st day of Shawwal) comes after finishing fasting during the month of Ramadan, and Eid (Al-Adha) or sacrifice (10th day of Zul-Hijja) comes after finishing the major acts of pilgrimage or Hajj.

Eid for Muslims is a time of celebration but of a unique kind. It is a celebration of gratefulness to Allah by responding to His call through fasting this month. Allah said: “O you who believe! Fasting is prescribed for you as it has been prescribed for those [who have believed] before you, so that you may be [ever] God-fearing.” [Quran 2:183]. It is a celebration of thanks that He gave us the chance to worship Him. Allah said: “They say: all praise is for God [alone] who has guided us to this! Nor would we ever have been guided had God not guided us.” [Quran 7:43]. It is a celebration of love and joy for practicing one of the most beloved acts to Allah, fasting! Allah said in the holy Hadith: “All acts of the son of Adam are for himself but fasting, it is for Me and I shall reward by it.” (Hadith narrated by Baihaqi). Eid for Muslims is a time of unity when they all break their fast together and perform a prayer out in the open [preferably] with men, women, elderly, adults and kids all attending the prayer. Ibn Abbas narrated that the prophet (PBUH) used to bring his wives and daughters to Eid prayer. (Hadith narrated by Ibn Majah). END_OF_DOCUMENT_TOKEN_TO_BE_REPLACED